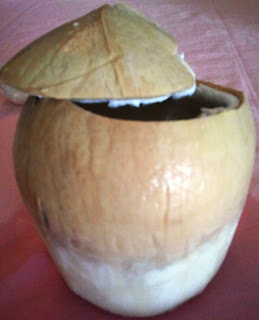 The craze for Thai food is a norm in Malaysia since we are accustomed to spicy cooking. In Ipoh, there are quite a number of stalls selling Thai food but only a few were in the restaurant category. I'm sure Koh Sam Mui will be the first to cross your mind if you were to think about Thai food. Well, let me share with you an air-conditioned restaurant category for Thai food. Ah Oh is quite hidden in terms of location, its situated in the same row as Waraku, its somewhere near the Ipoh Garden East Tues Pasar Malam area. 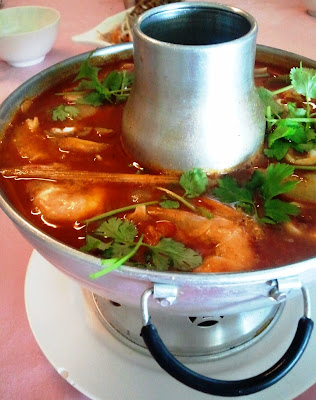 Not very sure of their off days, but they are opened for both lunch and dinner. Upon entering, we were warmly greeted by a few Thai ladies. And to get to peep there's a Thai woman in the kitchen, we were quite assured that we were in safe hands. Let the Tom Yam soup speaks for itself. A serving range from from RM12-RM20. But for a serving for 5 people, we got almost 2 medium prawns each with quite substantial portion of squids and mushrooms. Taste-wise, fiery enough to leave a sting on your tongue and lips but not numbing them. Good degree of sourness and not too salty either. 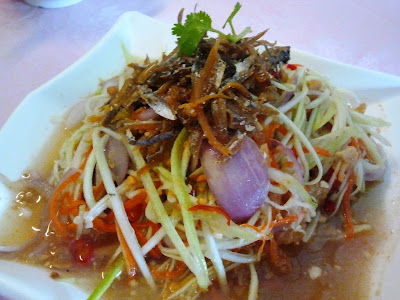 The Thai Mango Salad (RM15 if it comes with grilled catfish, but apparently catfish was out of stock) is a bit below average, not to my liking. I would prefer grilled cuttlefish to be used instead of anchovies as the garnishing/toppings. After all, this is mango salad and not fried taugeh, why the anchovies? =p 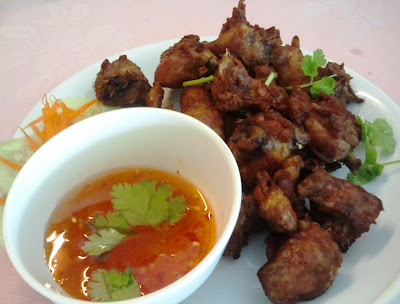 The Thai Fried Chicken was quite addictive as a finger food/beer snack but was not in the spectacular category. Well marinaded though with a crispy skin and juicy meat, I detected a faint "frozen chicken" odour. If they would go for fresh chicken instead or altered their marinaded to be more pungent to mask the faint odour, it would have provided me with a more fond memory of it. 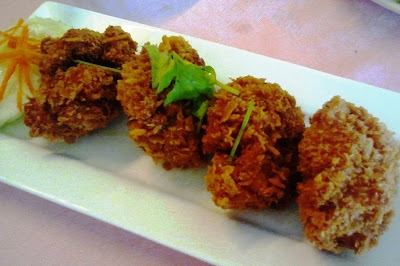 The Deed Fried Prawn Cakes was........ I dunno how to describe. Certainly very different from the typical Fried Fish Cakes we have in Thai cuisine. A serving is RM12 for 4 pieces. It is a bit similar to potato croquette and yam puff (wu kok). I find the taste of this dish to be average only. Total bill comes to RM91 for 5 person, inclusive of drinks (Thai coconut) and one more vegetable dish not featured in the photos. If I would to return, I think its for the Tom Yam, the rest of the dishes are just mere average.
Rolled by sEnGz at 1:15 PM No comments: