I somehow stumbled upon a random post on my newsfeed about a latest Korean Cafe in De Garden Ipoh. After doing some research and reading the reviews of their main branch in Mont Kiara, Doma Modern Korean is a Korean-Fusion cafe which serves good finger food and light bites to go along with your beer or soju, to main meals ranging from traditional Korean rice dishes and meat dishes to fusion noodles and burger dishes. They just had their soft launch since Monday prior to their scheduled grand opening this Thurs 20th Oct. Yours truly managed to squeeze in a mid-week lunch here. Today not only mark a significant mid-point to the working week but also a mid-point to a jaded soul on a 3 week waiting and silence period. Less on emotions, lets focus on the food here. 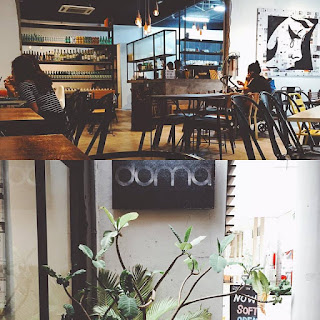 (Photo grabbed from their Facebook page) - Doma is situated at the ground floor, just next to Tea and Tattle. the same lot which houses the infamous Ayam Penyet few years back then. The setting is far from the usual Korean restaurant as the name goes, it has a modern twist with dangling light bulbs and wooden finishes on flooring and lacquered tables. We were the only table dining here this afternoon, probably less publicity was made on social media, despite it is just one day away from their official first day tomorrow. 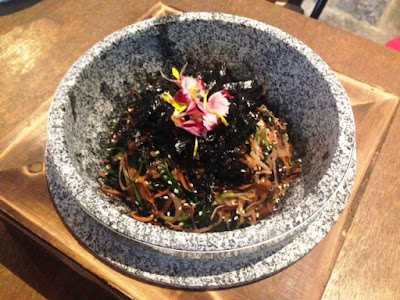 The menu in Ipoh's branch is much more extensive compared to the one in Mont Kiara (probably the menu uploaded to Zomato is no longer updated). From the rice series, we were slightly disappointed that the Kimchi Fried Rice with Bacon and shaved cheese was not ready yet as their kitchen is still under some renovation. Hence, we opted for the Doma's Bibimbap Stone Bowl (RM25). An assortment of julienned vege such as carrots, daikon and cucumber alongside seaweed and sesame seed topped the steamed rice. The paste lacked the punch as I felt the taste was slightly bland after giving it a good mix. And the version here incorporate a fried whole egg rather than a raw egg broken on it. Since there are a few more rice options, I will give this a miss the next visit and go straight for the Kimchi Fried Rice (another with bacon sure scores that extra points from me!) 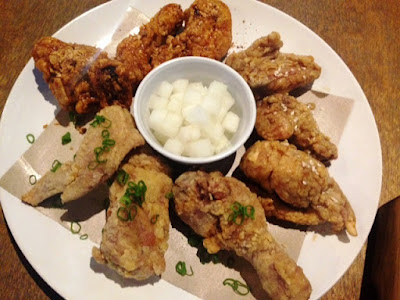 This is their Signature KFC (Korean Fried Chicken) available in half chicken portion (RM29) or full chicken (RM54) and you get to try all 3 different flavours at one go - sweet soya, sweet chilli and spiced salt at one go! I find the plain one a bit bland and prefer the ones with sauce. I have read so much about Kyochoon in the Klang Valley and have not really tried what is so special with Korean Fried Chicken. I would say its the crispy and light batter with a juicy centre coupled with a punch from the sauce. For those like yours truly who are curious on what Korean Fried Chicken is all about, you may try this or opt for the snack version of chicken wings (RM16) or chicken burger (RM17) to cater to your budget and/or dining pax. 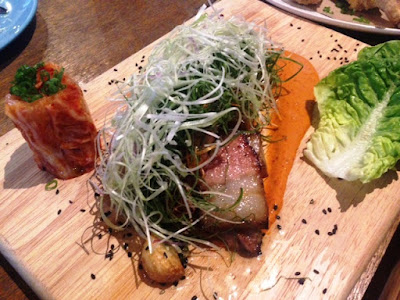 With the kitchen still unable to serve bulgogi, pork knuckle (RM70+ for 2 pax) and pork ribs, we were recommended this dish - Korean BBQ Pork Belly (RM35). Tender slices of pork belly with a 50-50 lean/fat ratio might scare off the health freaks but the layer of fat is the highlight of this dish. Thinly sliced, the caramelized layer of fat literally melts in your mouth and sends your tastebuds dancing in cholesterol orgasm! The pinkish lean layer was done just right. Cooked but not too dry. 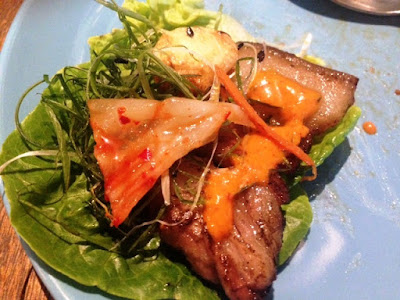 Else try this arrangement - some kimchi, spring onions, roasted garlic, chilli mayo, slice of heavenly pork belly on top of the butter-head lettuce to give a myriad of flavour and mouthfeel! Totally satisfying! The workout can always wait. 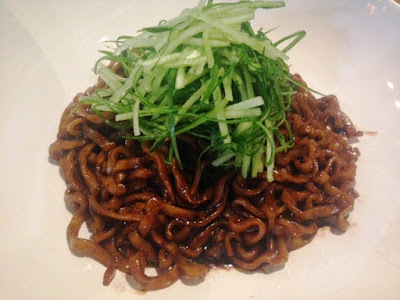 Still not full from the initial 3 dishes ordered, we opted to try some traditional Korean noodles instead. This plain Black Bean Paste Noodle cost us RM19, quick a hefty sum to pay if you note that its just plain noodles with some julienned cucumber and edamame beans. The first spoon was slightly refreshing with contrasting texture of crunchy cucumber with slightly chewy and bouncy noodles and the edamame gave a sweet finish to the strong flavour of the black bean paste.If you wish to try this, make sure you come in a sizeable group else it will taste slightly jelak after a few spoonful. Else opt for the Japchye Glass Noodles instead or other fusion dishes since I was told one of the partner chefs was a Korean based in Australia before embarking on their first outlet in Mont Kiara last year. 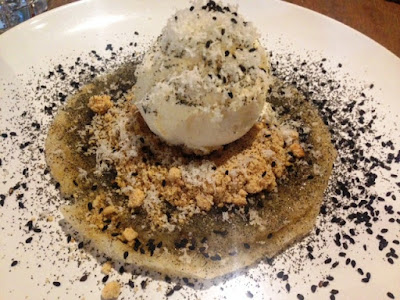 After searching for some reviews online, many recommended to try the Sticky Rice Pancake dessert. Premiumly priced at RM19, you can choose from a few flavours such as Nutella, Green Tea, Red Bean and I opted for the Black Sesame. The pancake has a slightly crispy exterior, just like your typical rice bubbles while maintaining a chewy centre. Besides the black sesame I am unsure of the other "topping" which seems to be some desiccated flakes or breadcrumbs? This is one dessert I find it to be very unique indeed and I don't mind returning for the Nutella option 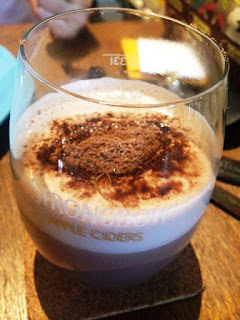 Drinks are priced around any cafe range, with coffee wuch as Latte, Americano, Mocha and Hot Chocolate ranging around RM10. For non caffeine beverages, they have several type of tea such as green tea, roasted rice tea, etc. And for alcohol lovers, you will love the see the photo below 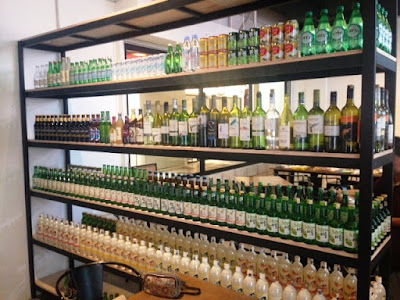 They have an extensive range of Soju and other Korean wines not to mention Western white wines and red wines. 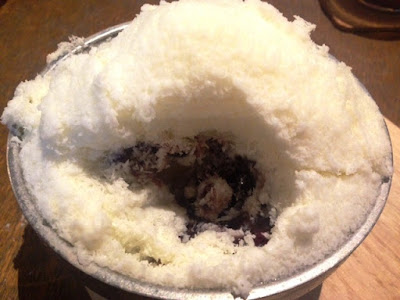 And after much waiting, Doma is the one who heed the call to introduce the Bingsu craze to Ipoh. A friend told me that this is called the Injeolmi Bingsu whereby the shaved ice should have a milky aftertaste. Although the version here taste somewhat bland, the red bean puree was hidden beneath for a reason. Not to mention a layer of mochi in between which gives is a chewy bite. Other customers will have to pay RM19 for this but yours truly got it for free because the friendly Korean Manager from Daorae was there that time and probably through his intervention, yeah, he treated us to this dessert :) 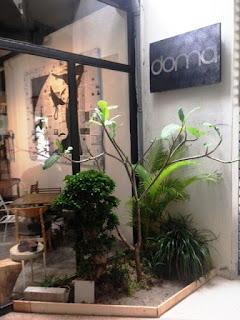 There you have it, the scoop of being the first food blogger to review this new venture in Ipoh. I have yet to see my blog view count skyrocket since my invited private dining session in iMiirage and hopefully being the first to review this place, you guys will enjoy having an insight to it. Yours truly took slightly more than an hour to come up with this post and he should be busy rushing for his thesis now. Cheers!
Rolled by sEnGz at 10:43 PM 1 comment: