The outlets are springing forth one by one in major shopping complexed within the Klang Valley. I heard people were willing to wait for more than half an hour to secure a seat to dine here. And a buddy of mine who is not a foodie also made special mention of this place, saying that the pricing is reasonable for KL standards and it taste kinda decent too. Knowing this person from university days who is a sucker for fried food, if he recommends something soupy and clear, it gotta be good I reckon? Not to mention that when my ex-superior went down to KL to visit her son, out of all places, her son brings her to Go Noodle! Another friend of mine also keep craving for this everytime she drops by KL. Makes me wonder what is the sorcery behind this craze over noodles, which seems to me appear quite generic. 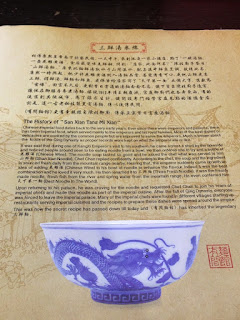 Upon planning a solo-trip to Genting during my transition period between jobs, I browsed through the list of food available in SkyAvenue and already set my mind to try both Kyochon and Go Noodles. After checking in to my room, I made a dash to have a late lunch. Nothing is more rewarding that a bowl of steamy and soupy dish to warm your hungry stomach at a chilly weather setting. 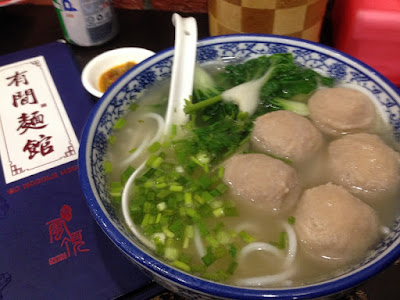 It may appear generic, with customizable noodles, soup base and toppings. Not wanting to upset my already empty stomach, I went for the clear soup and their signature Mi Xian. The “Bursting Meatball” seems very attractive. Well, at least by the sound of its name, as who could forget that iconic scene of Stephen Chow’s God of Cookery. 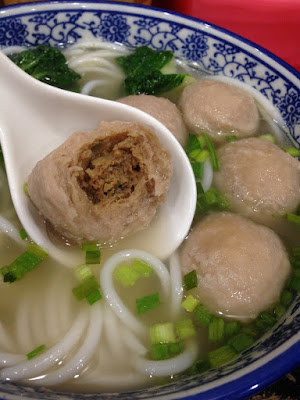 There you have it, the Bursting Meatball. The movie scenes of the meatball fillings squirting some broth to the face of the person sitting on the opposite end of the table. Yours truly took the counter table just in case, I will just only dirty the wall in front of me. Well, fortunately or unfortunately, none of the mentioned happened. There is actually another flavourful layer of minced pork inside the pork meatballs. From the closeup picture, you can actually notice that the filling is more coarsely minced which has a contrasting texture to the outer layer and it is more packed with flavours from the marinade/broth. Though there is no explosion effect to the surrounding, do take caution not to scald your tongue as the filling is indeed quite hot. 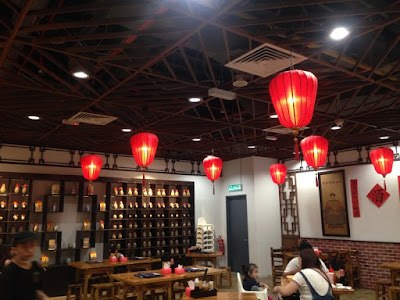 This is a glimpse of their outlet in SkyAvenue, far from being full because I dined in some off-peak hours. The decoration is similar across as I visited their Gurney Plaza outlet. The seating maybe be slightly uncomfortable as diners are packed close to each other and the stools provided will ensure that you leave soon after your last spoonful of noodles. 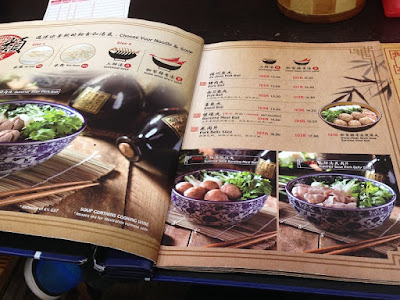 On my second visit with my parents, we ordered 2 bowls for sharing. This time, we managed to try both the clear soup and also the spicy broth. And I have the liberty to have add-ons for my noodles as the menu in Gurney Plaza adopts the standard price, unlike in Genting whereby the entry level bowl of noodles will cost you about RM15 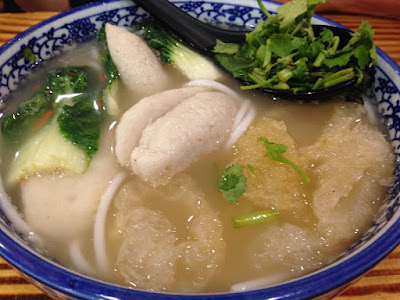 This is the fish paste Mi Xian with an additional topup of fish maw (RM8 for 60g if I remembered correctly). The fish paste is very bouncy without any unpleasant fishy smell. The Chinese wine complemented the clear broth well. Although I dislike the strong-smelling coriander sprinkled on top, I think most will agree that it plays a complementary role in enhancing the taste of the soup. Not a person who appreciates fish maw myself, my dad says that it was quite good though 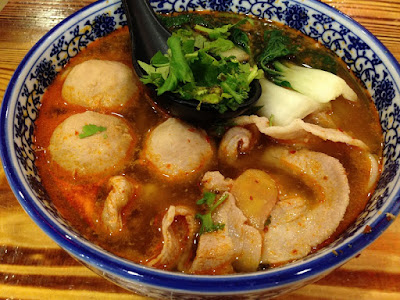 As mentioned, the second bowl was the spicy broth. Far from being the tongue-numbing "ma lat" type, the spicy version gives a slightly sourish taste, something similar to a cross between kimchi and your usual Szechuan style of soup. I opted for the pork belly noodles with a top-up of bursting meat balls. Note that for top-up, you only get 3 meatballs. I forgot how much was the top up but it was reasonably priced. Two bowl of noodles above and one drink comes to slightly above RM40. 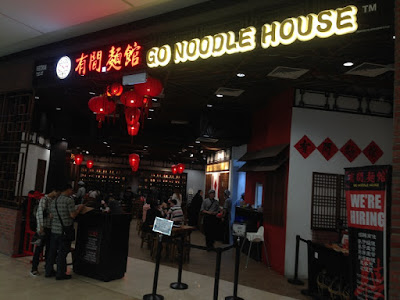 In conclusion, I will still recommend the clear broth over the spicy broth and Mi Xian over the usual beehoon. For the toppings, lala and garoupa slices in clear broth is topping my wishlist if I were to step in any Go Noodle outlet. The bursting meatball and fish paste are still in my recommended list though as I find the pork belly nothing really special to shout about. They serve pan mee as well but I think the texture of Mixian in aromatic soup with wine will keep you satisfied for at least another few tries.
Rolled by sEnGz at 8:20 PM No comments:

Kyochon, the real deal when it comes to Korean Fried Chicken 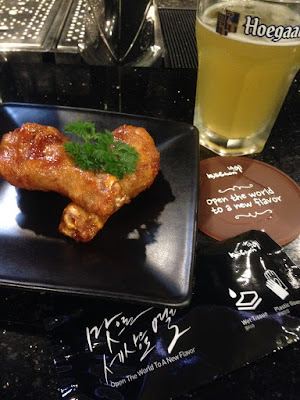 As a continuation to my recent post on my disappointment encountered with Choo Choo Chicken in Greentown Ipoh, let me share how a proper Korean Fried Chicken should taste like. There are many jumping into the Korean themed bandwagon for a quick buck, with the lacklustre Choo Choo Chicken which I tried and two other new initiatives identified in Ipoh Garden East area, namely the B&L chain on some “Korean fusion” dining and also another Ko.Ko.Chix which I doubt both will be good. How I wish Kyochon would open in Ipoh and give these half-passionate imposters a deadly blow to their start-up capital. 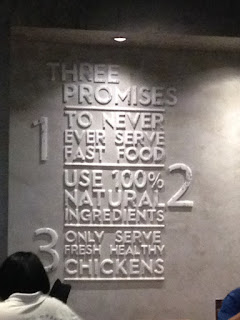 Firstly, let me bring to your attention the few key basic rules to follow in serving good fried chicken, regardless whether its Korean or not. The basic rule is to have it freshly fried. Yes! Made upon ordering! It doesn’t matter if its Korean Fried Chicken or not, if you are running specialty restaurant and charging a premium, RULE NUMBER 1 – THIS IS NOT A FAST FOOD RESTAURANT! Though the waiting in Kyochon might quite long, 15 to 20 minutes. But at least I am assured of freshly fried chicken, which is piping hot all the way from the crispy skin deep to the core of the scraps of meat from the bone! Coming to its second and third promises, I could taste the difference when non-frozen chicken are used. Chicken should be fresh and only maintained chilled at the whole supply chain. Since I am paying a premium for their fried chicken, I am expecting it to be on a league of its own, not comparable with those of mamak/chap fan quality. 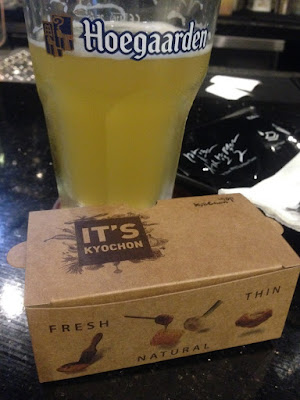 During my first visit, I had a light dinner at their Sky Avenue outlet. I was amazed that they serve beer in this outlet. At first I thought they design it in a way that one side of the restaurant which the bar counter top section is located is meant for "non-halal" patronage. Only I realized later that during my second visit in G-Hotel, Gurney, beer is a staple in the menu across all outlets. They serve Hoegaarden, Carlsberg and Somersby only if I remembered correctly. While waiting for my food, which took around 15 minutes, I shamelessly requested the staff standing at the entrance for a portion of free samples. Yes, the one inside the box contain a garlic soya sauce flavoured wingette. Yup, it tasted good although no longer hot. 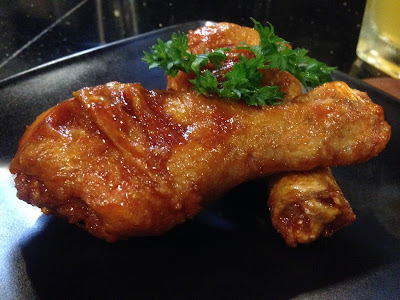 As I was still quite heavy from my late lunch at around 4pm, I just had the cheapest item from the menu, which is two pieces of drumstick. I was a bit adventurous and went for the Red Pepper series which is a hot flavour. The one I had in Genting seems to lightly lip and tongue numbing but during my return trip to their outlet in G-Hotel Gurney sidewalk, the spiciness seems to be a little toned down. 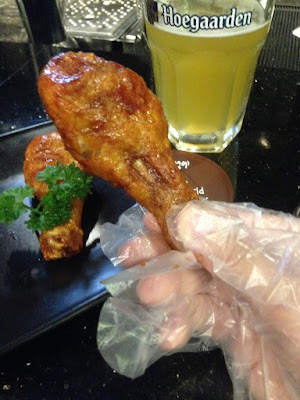 The portion is quite small though. The drumstick is almost like an oversized drummete from the chicken wing portion. You can estimate the size from the photo above. Oh by the way, they provide a set of wet towel tissue and one sided piece of glove so you can keep your hand cleans throughout the meal. RM12.50 for two drumsticks (available in only soya garlic or red pepper series) in most outlets except for Genting Skyavenue whereby they are charging RM16 if I remembered correctly 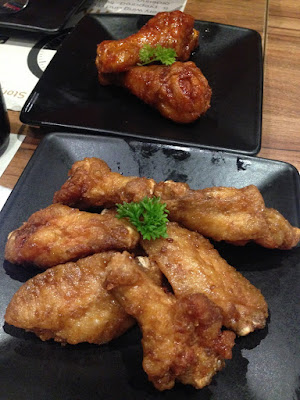 On my second visit, we tried the soya garlic wingette and drummete (8 pieces for RM19.50 which is actually just 4 chicken wings portion). When I tasted the sample of this flavour in Genting, it was already good despite being not piping hot. But when it was served fresh and hot in front of me now, it was even better! Frankly speaking, the selling point of Korean Fried Chicken should be their crispy skin and their light coating of sauce. The meat inside, despite being juicy and fresh, was not really marinaded. Hence the flavours on the exterior play a vital role, be it Soya Garlic, Red Pepper or Honey series. 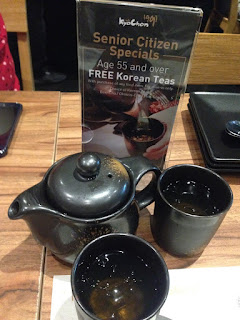 They do serve half chicken and full chicken portion but I strongly recommend you to keep with the wingettes. Oh yeah, if you have any senior citizens in your dining group, please claim this offer of a complimentary pot of either corn tea or barley/wheat tea (worth RM7). Else, just binge on the crispy wingettes and cool yourself down with a pint or two of booze. Signing off, happy Winter Solstice in advance to my dear readers :)
Rolled by sEnGz at 10:08 PM No comments: