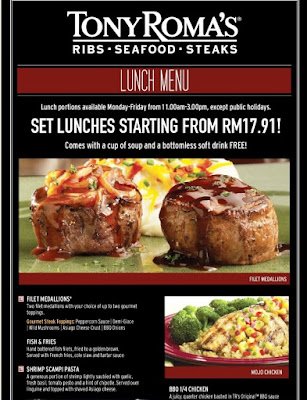 Well, this is a backlog post which I felt like posting since a letdown after knowing that Tony Roma's is not among the tenant list of the new Aeon Klebang mall. Instead, they got a Cruisers Steak House which I felt is a far cry from some of the big names available in the Klang Valley. I guess probably most also felt uncertain about Ipoh market as the purchasing and spending habits of average Ipohian is far from promising. Look at many of the failed attempts. Rather than lamenting on how Ipoh did not seem to grow much after decades, lets look into what Klang Valley have to offer... 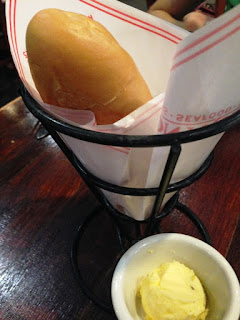 Tony Roma's is a pork-free restaurant but I doubt there is Halal certification due to they serve alcoholic beverages. I noticed there are some open minded Muslims who don't mind dining in. So basically I'm gonna review their weekday lunch set here. Before we go on, here is a picture of their complimentary bread and butter. 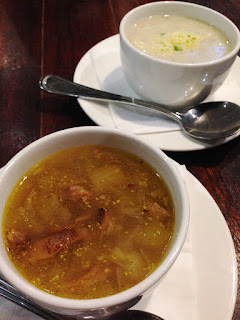 This is the Soup of the Day which comes with the set lunch. The mushroom soup is creamy and satisfying. This is how it should be, the portion need not be to big, but the soup must pack a punch upon the first spoonful. The same can be said for the Vegetable Soup. Another savoury soup with loads of onions and some bits of beef, tummy warming indeed and complements the warm bread. 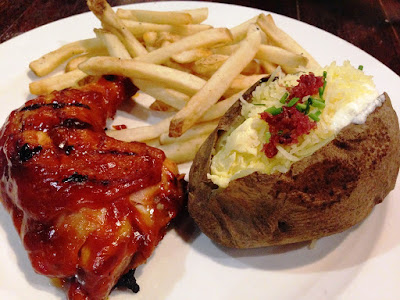 This is the BBQ Quarter Chicken served with 2 sides. By default its the fries and coleslaw but apparently the waiter allows to switch it to other side available for the day. The chicken was deliciously  tender and juicy. The sweetish BBQ sauce glazed on it provided the smokiness aroma. The baked potato was served with sour cream, shaved cheese and bacon bits. Initially I changed the fries to try something else, mashed potatoes or baked beans but I think the waiter missed out on my request on the sides. This set was at RM16.90 if I remembered correctly. Very affordable set lunch for Klang Valley standard... 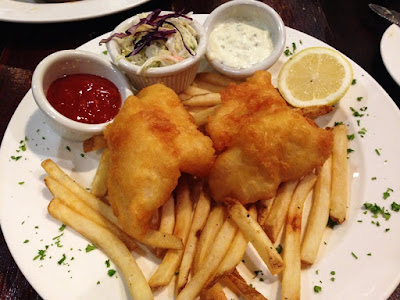 This is the the Fish and Fries which comes in its default selection of side dishes which are the well, you guessed it, Fries and a refreshing  coleslaw. The batter was neither too thick and the fish was well cooked within. I was not too sure about the fish fillet used but I am quite sure it is not Dory. The fries are the thick cut with some skin still intact, a strong evidence these are definitely not your generic shoestrings found in fast food chains. 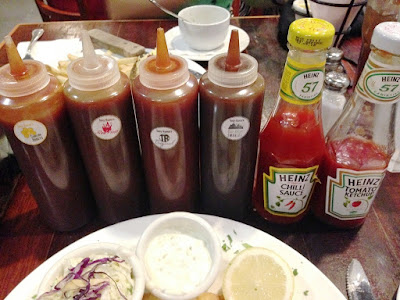 The myriad of sauces to go with your meals - besides the Heinz tomato and chill sauce, they have 4 in-house sauce: Honey, Original, Hot and BBQ. 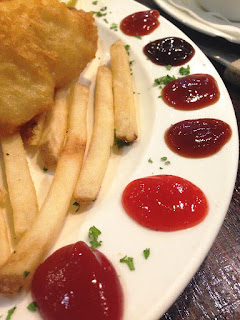 Can decide which to go along with? Try a bit of everything. The honey and spicy one are my personal favourites, proably the original and BBQ one is quite similar to one another and coincidentally the roasted chicken was flavoured already in such a way. The dining experience was memorable indeed and the service was very attentive. This is my second time here, the first time dining alone and trying their signature Roma's ribs, which has tender fall-off-the-bone texture. And there will definitely be a third time :)
Rolled by sEnGz at 11:45 AM No comments: 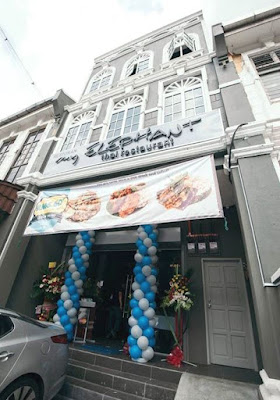 MyElephant is a franchised Thai Cuisine from the Klang valley which commenced business back in 2007. With 5 outlets in the Klang Valley, I was in slight disbelief that they have chosen Ipoh as their first outlet out of Selangor. Frequent followers of my blog will notice how I lament on the stagnant income growth of average working Ipohians and wonder will mid range-high range food outlets manage to sustain their business here. Upon browsing the menu from MyElephant, I doubt it is relatively expensive for majority Ipoh people. Not that we can't afford a meal there, but probably once in a blue moon :) 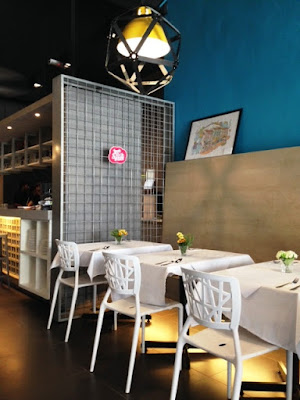 Perhaps they too will realize it soon but good thing that they adopt the lunch sets promotion which is already in place in their Klang Valley outlets and somehow manage to cushion the effect. Well, if its not because of the promotional lunch sets, I doubt I will step in and give it a try. Nevertheless if you were to try the lunch sets, you have to hunt for packing spots as MyEle is located along the same street as Bricks and Barrel (behind Cowan Street). Its a busy road during working days, else, fret not, drop by on weekends, like yours truly. 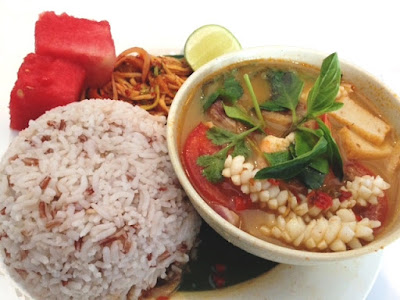 First set sampled was the Tom Yam Soup with mixture of Brown Rice and fragrant rice. (RM11.90) The Tomyam is has rich flavours in its own uniqueness. Not being stinging to your tongue, the spiciness is between mild to average (based on my scale as I cant tolerate spiciness) while it bears a slight "murky" broth instead of the usual clear but with a layer of fiery reddish hue at the surface, Served with some squid, fish cake, chicken meat, it will be near perfect if the soup was a bit hotter. Well, I do note the problem with franchise as they try to standardize everything from pastes and pre-prepared ingredients from a Central Kitchen, but I hope they do keep it to a boil to ensure the soup is piping hot when served. 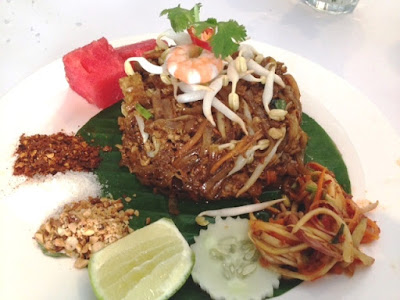 The second set sampled is the Pad Thai (11.90) Its a famous street food which is basically stir-fried flat Thai rice noodles in a sweetish and spicy sauce. Served in a quite authentic manner like how the Thai enjoy it, there is additional sugar, chili flakes and crushed peanuts with a wedge of lime. Stir everything, give it a good toss and enjoy it........ but its a bit spicy to my liking. Haha... 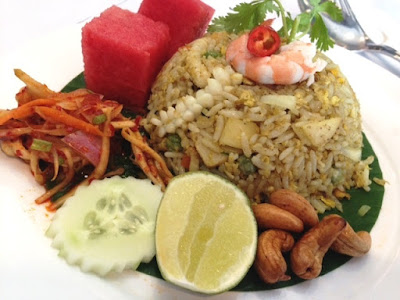 This is the Pineapple Fried Rice (RM9.90) which almost share the same ingredients from the Tom Yam soup. The slight disappointment is I can't feel the presence of the pineapples were barely felt. Instead, the amount of green peas were a bit too much to my liking. They have gone a bit too much with the spice such as tumeric powder which I felt it was a chore to finish the whole plate on my own without reaching for water. If only more juicy pineapples were added to contrast the flavour to give a more tangy and refreshing feel. It just didn't hit my preference, it might appease your tastebuds though. 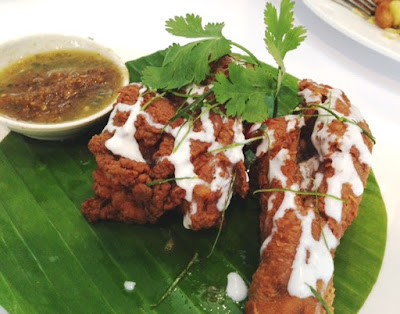 I forked out RM6.50 to add a whole fried drumstick (with the thigh portion). The skin is crispy but the marinade did not embody the whole flesh though. The shredded daun limau purut and coconut cream played their part to save the dish though. 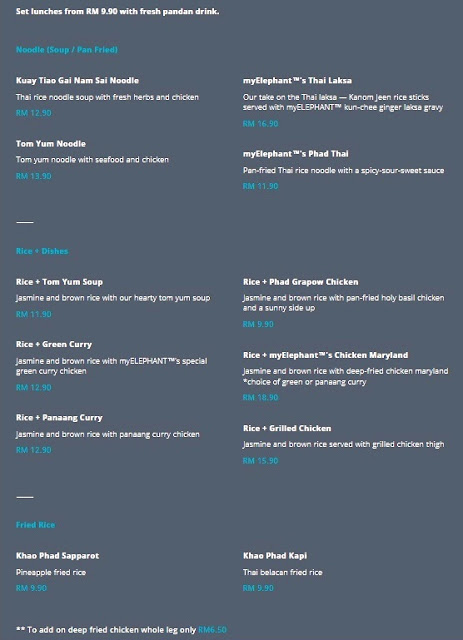 Final verdict: I will recommend you to try it out since the lunch sets is reasonably priced (maybe slightly cheaper than Black Canyon) and it comes with a refreshing Pandan Syrup drink. The papaya/mango salad served along with every set is addictive and appetizing! But the watermelon cubes should NOT be served next to the rice/noodles. While they were serving the tomyam set, the soup spilled a little and somehow "contaminated" the watermelon. Serve it separately else omit it completely!

Feel free to check out their ala carte menu and get ready to hurt your wallet a little as it is not cheap for Ipoh standard. But from what I tasted from the lunch sets, I probably will not dish out RM200 for a family dinner here. My personal favourite is still Koh Sam Mui despite I know where is a new kid in town called Pink Elephant (which is also on the upper end pricing range). So Ipohians, what is your pick?
Rolled by sEnGz at 2:33 PM No comments: