April 19 marks the birthday celebration of our Sultan Perak and indirectly signifies a long weekend getaway since it falls on Friday this year. This is proven true when the train tickets was almost sold out for that day. I only managed to get the 7am train few days before the departure date. Upon arriving in KL, me and my friends rented a locker in KL Sentral, settled our logistic arrangements and headed to Midvalley for lunch. It's my second time celebrating my birthday in Italiannies and its at the same branch in The Gardens. 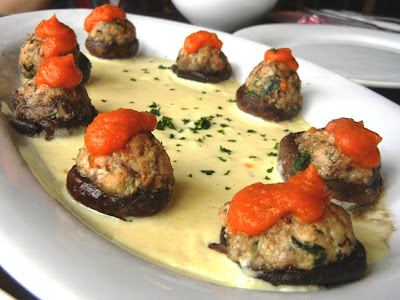 Looks like dim sum to you? Hehehe... This tiny morsels are actually Stuffed Mushrooms, one of their signature appetizers. Available in 2 portions, Regular (8 pieces @ RM24.90) and Abbondanza (RM34.90), the mushrooms are stuffed with minced chicken sausage, spinach and herbs. After oven roasted, they are topped with a tangy tomato puree and are arranged on top a creamy cheese sauce. This dish works its way well as it was very appetizing due to the tomato puree but the heavy cheesey aftertaste might be a bit too heavy for an appetizer. 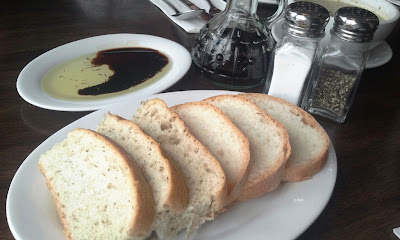 Complimentary foccacia with vinegar dip and balsamic vinegar acted as a palate cleanser instead. And also to fill up the voids in our stomach. Yup, 3 of us only ordered 1 appetizer, 1 main and 1 dessert! 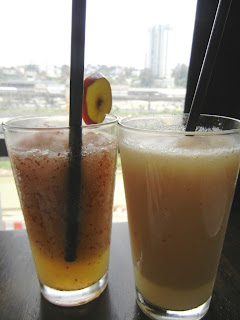 While waiting for our mains, we sipped on the fruity concoction offered - Fresh Fruit Shakes (RM12.50/glass). It was very rare for red apple to be used to make fruit juices. The blended red skins created a nice visual to the drink, very refreshing in both taste and appearance. The lychee on the other side was not too sour and was also on the refreshing note. 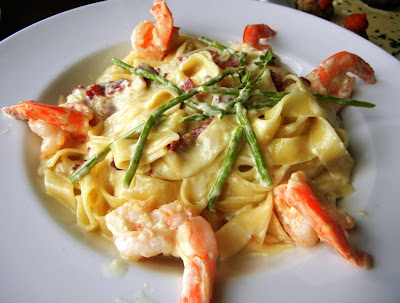 We did expected our main to be quite huge in portion and we were right with our Shrimp & Asparagus Alfredo (RM38.90). We skipped the Cabonara because one of my friends is abit sensitive to eggs and we went for this white sauce fettuccine instead. The parmesan sauce was rich and creamy and beef bacons (sorry, no real thing here as its a pork free restaurant) and this dish should be shared! Maybe I am abit too picky.... I think they should do with a bit more herbs as they taste is quite bland despite being creamy. 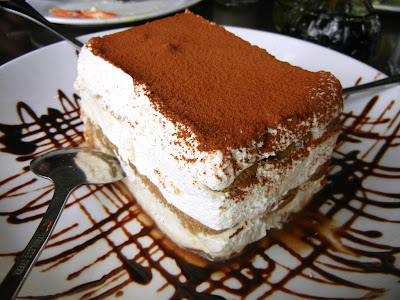 Prior to our meal here, I keep defended that the Tiramisu (RM19.90) here is better than the version in Alexis because I never felt that the version is Alexis is authentic. I mean how can you find sugar glazed nuts and strawberry sauce in a Tiramisu. Nevermind that. But the Tiramisu in Italiannise taste has dropped abit since my last visit here for my birthday 4 years ago. Perhaps, the service during my visit here sucks - they didn't key in my order and my Tiramisu arrived later in almost lukewarm state. Yes, they do keep to the lady fingers-expresso-liquour-mascarpone cheese-chocolate powder version but somehow, something was still missing. The bill is not cheap for just 3 main items and I would like to thank Christine and Evonne for this belated birthday treat. Really appreciate them as I found out that nowadays, many of us are too dependent on Facebook for birthday reminders. =/ Well, they didnt. They just postponed the celebration a week later.... in conjunction with our KL shopping spree and Genting crash trip. Stay tune to read more about it :)
Rolled by sEnGz at 11:24 PM No comments:

A quick weekend trip up north to the Pearl Of The Orient.

It was an eye-opening experience to stay in a budget hotel this trip to Penang. Yup, those budget hotel WITHOUT air-cond. In simple a motel or some might blatantly term it "prostitution den" (direct translation from Cantonese). To look on the bright side, it gave us a slight advantage to roaming the traditional Georgetown for both food and mural wall paintings. That was my unforgettable experience while attending a friends wedding last month. 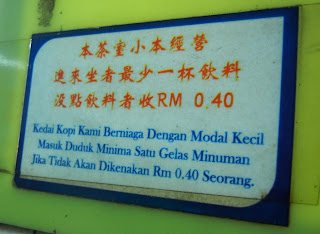 An "amusing" post - As if the stalls operating in your coffeeshop don't pay you rent right? 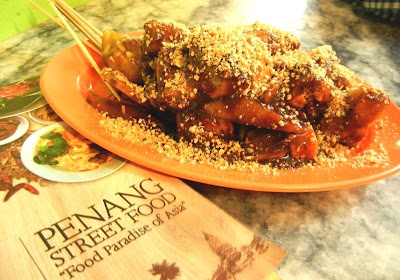 Okay, let's move on to some famous names which is associated to street food. Firstly, Penang Rojak - one of their signature item which they take pride in. The version here omits beansprouts, watercress and crackers but have replaced them with grilled tau fu pok and also brown cuttlefish. It's RM6 for the portion shown in the picture above. 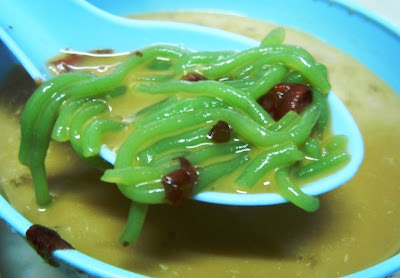 The Penang Road Cendol is something to die for, one bowl for RM2.30, this is da bomb when the weather is scorching hot. Never expect it to be a good thirst quencher because it turns out that the sweetness of the syrup is not tooth-numbing. They are never skimpy with the coconut milk BUT I feel the taste is not as rich as my maiden experience last year... 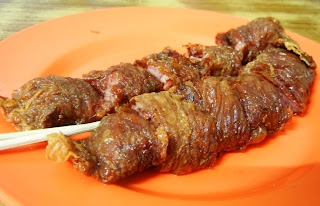 The lobak is quite nice and appealing to the taste buds, thanks to the generous among of seasoning – five spice powder, soya sauce, pepper, etc. It's reasonably priced at RM1.80 per roll. Not bad, I kinda love the version here! 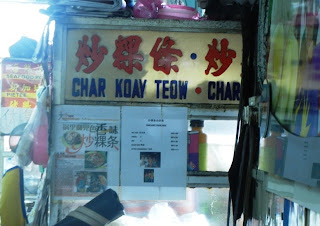 The Char Kuay Teow with duck eggs (RM5.50) compared to the one with normal eggs (RM4.50). On my previous visit, I tried the one with mantis prawns. So lets see how the duck egg fried flat noodles fare this time. 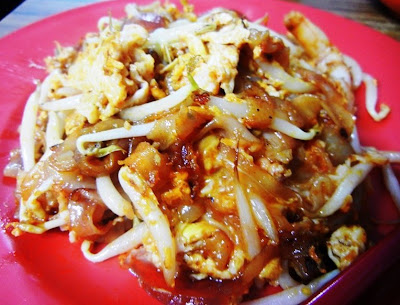 It was my first time trying it with duck eggs. I think due to many customers, the frying process was cut shorter than normal. Part of the eggs is still slightly wobbly and this caused the noodles to be a bit wet and messy. I think if the eggs were a bit dryer, then dish would be perfect due to the larger size of duck eggs and the fragrance of duck eggs compared to chicken eggs. 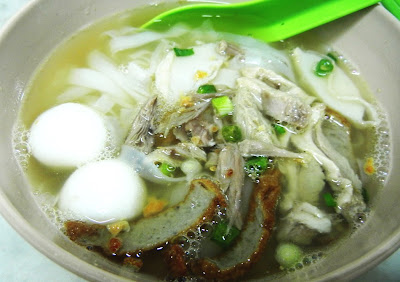 I always undermine their Kuay Teow Thing. To me, it is just a cross between Hor Hee and Kai Si Hor Fun. But the version here in Joo Hee Café has a small surprise to offer. Instead of shredded chicken meat, duck meat was used. In my opinion, it is just a gimmick to be more accurate. The soup is nothing special to shout about and the portion… Hmm… RM3, well fair enough. 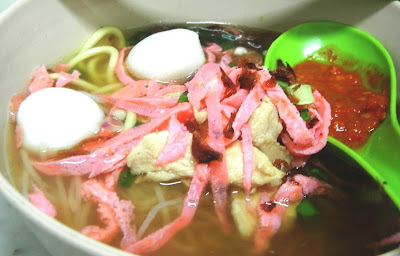 The Lam Mee - a lacklustre effort poured in - the meaningless attempt to colour the shredded omelet pink even made this dish worse. And the method of serving the sambal belacan chilli paste in the spoon is a dumb idea. Yes, we know you wanted to save some effort from washing a sauce plate but can you not deprive a customer from drinking the soup while eating the noodles? 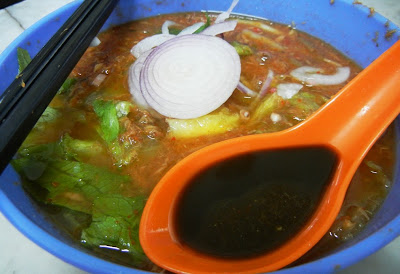 This one still understandable as the he ko (shrimp paste) will be added to the soup eventually. But still, need to be that calculative mer? Famous hawkers! Bah!!! Anyway, from the looks, it seems this version in Joo Hooi Kafe is much better and lands more "kick" than the Kek Lok Si famous laksa which I heard is now RM4 a bowl!!! 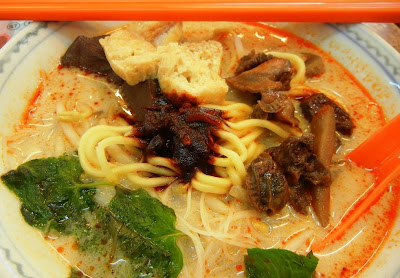 On the next day, I managed to try the Penang version of curry noodles. Not putting much expectation, so not much disappointment involved too. Yes, I do agree this is not any famous stall but their version didn't seem to agree with my tastebuds. For RM3, you get some cockles, coagulated pork blood, cuttlefish and some tau fu pok. The dollop of curry paste did not work much chemistry after it to the slightly creamy broth. 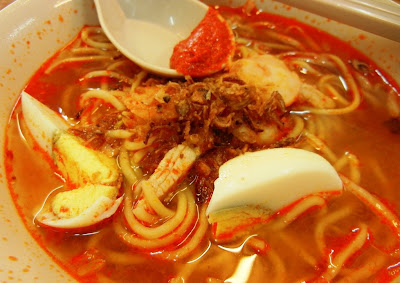 I had this in a coffee shop near the Pulau Tikus wet market. Not the famous one, apparently when we reached there about 9am+, the famous stall has already finish selling and are cleaning up! Not bad right? Assuming they open for business at 6am, their business hours is just a mere 3 hours! The bowl of Prawn Noodles is just RM3. Not the best I've tasted and I have tasted a few good ones in Ipoh which can give them a run for their money. 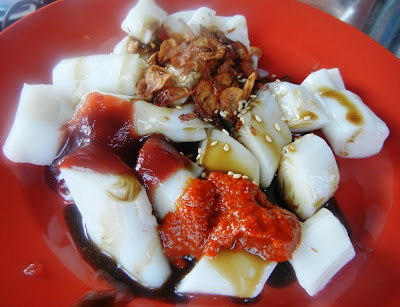 Love it or loathe it. The Penang version of Chee Cheong Fun (RM2) as shown above. This proves to be MEAT for my friend's tastebud and POISON to mine! Hahahaha... Curry pork skin and mushroom soup Chee Cheong Fun "Ipoh Style" FTW! 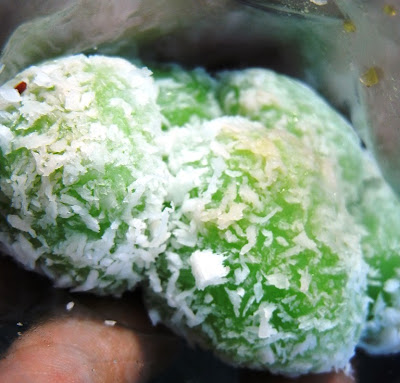 This is something you wouldn't wanna miss - for RM70 cents for approximately 5-6 pieces - I find it still very reasonably priced. And I have no complaints though I wish there would be more gula melaka (palm sugar syrup as the filling) 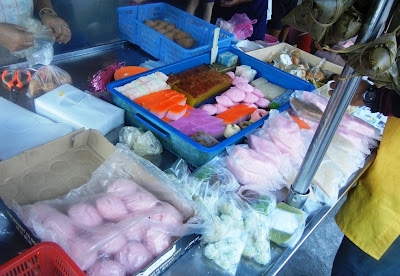 Looks colourful! The plethora of Nyonya kuihs which some of them I could hardly identify what are they... 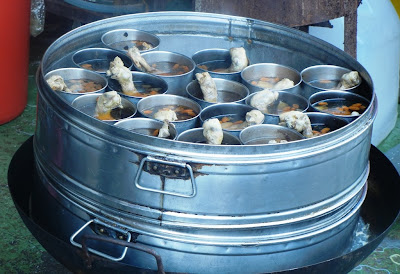 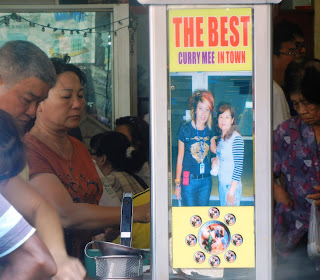 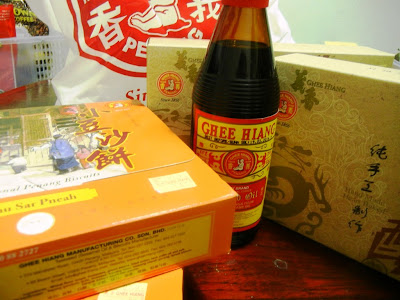 Picked up some noteworthy souvenirs. Personally I prefer the Teluk Intan Tiger Head brand taste slightly better than the Ghee Hiang version of Tau Sah Peah. It's my first time buying the sesame oil and mom commented it was good and reasonably priced too. 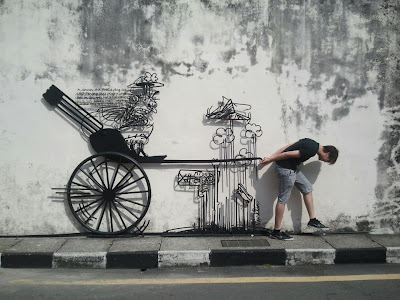 So much for the food hunt, and it's time to burn some calories hunting for the mural paintings. I will not go in depth in these as you can easily find the pictures and locations from the web. I'm still suffering from sleep debt after a weekend shopping trip in KL and Genting. And that means more food reviews coming up and less procrastination. Cheers! :)
Rolled by sEnGz at 10:48 PM No comments: