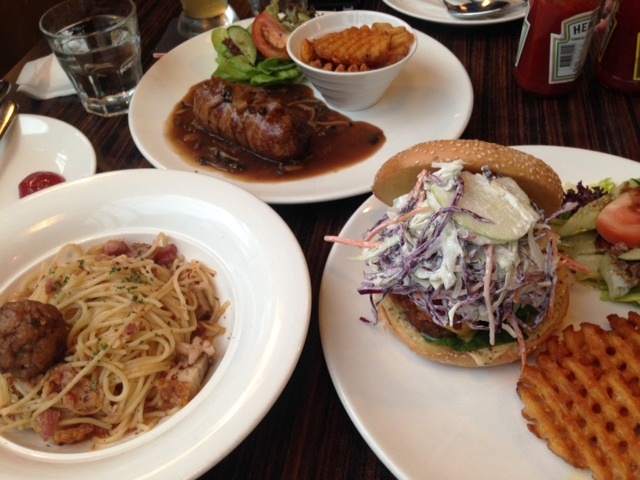 Mention "Three Little Pigs" and you will most likely be reminded of the nursery rhyme. Mention "the Big Bad Wolf" and the thought of a book fair will pop up in your mind. Combining both together, the name “Three Little Pigs and the Big Bad Wolf” is a familiar name in city of KL and Klang valley with the hype and fame spanning across states. 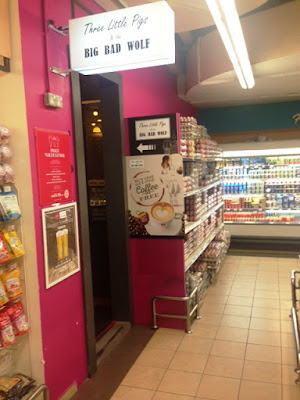 Having two outlets currently in Bangsar Village and Tropicana shopping mall in PJ, yours truly went for a late lunch fix at the former. This non-halal hidden gem is indeed hidden for those who are here for the first time. One would not expect it to be hidden INSIDE a supermarket/premium grocery store! The photo above says it all. That is the "secret passage" to divine porky bliss. 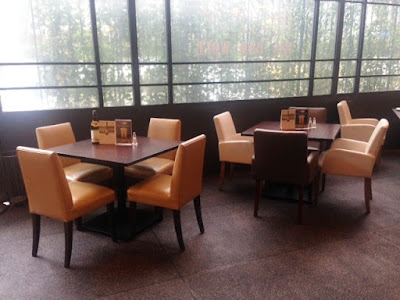 There are 2 different dining area in the Bangsar Village outlet. We opted for the glassy area overlooking the carpark. Since it was raining, the raindrops on the glass and lighting is just perfect for a lazy afternoon late lunch and catching up with long lost friends. 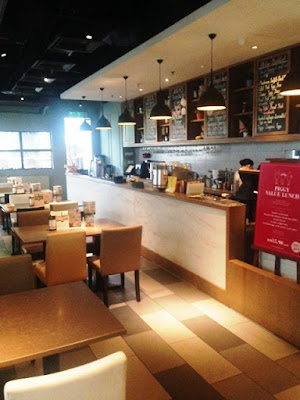 Else, once could opt to dine in a more cafe-like setting with a laminated wooden theme all across and warm yellow lightings. There were more swine inspired murals on the blackboards hanging on the wall as opposed to the glass wall dining section. 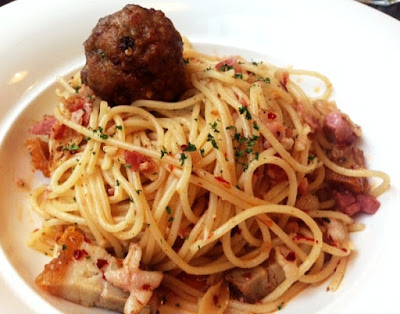 Piggy Aglio Olio Spaghetti (RM31) is one of their signature pasta besides the Bacon Cabonara creatively named “The Wolf’s Favourite”. Since its already late afternoon, I felt like avoiding something creamy and went for Aglio Olio instead. The spaghetti (I think its angel hair) is cooked to near al dente, not being the mushy texture we Malaysians are mostly accustomed to. The Italian noodles were slightly bouncy and give you some feedback while chewing them. Besides the texture, it is also well flavoured with garlic infused olive oil with the right amount, leaving it neither too dry nor oily. The mixture of roast pork, honey flavoured pork ham, crispy bacon bits and a pork meatball justify the piggy hashtag on this dish. Although I may have slight comments on the roast pork not having crackling skin and the pork meatball looks “alone”, I am very satisfied with this dish and I would recommend it for sharing so that you have the liberty to go for other pig-inspired dishes form the menu. 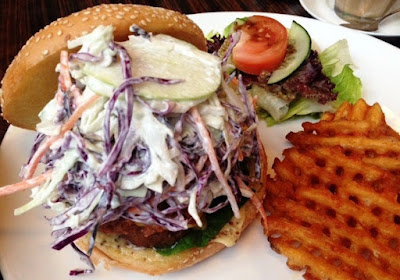 For example, we opted for something conventional in terms of a pork burger. After knowing their signature burger, fondly named The Mighty Pork Burger, which has a pork patty with sunny side up, I had my eyes on other items. Spoilt between choice of a Mac and Cheese Burger (using fried mac and cheese to replace the bun, how ingenious, and sinful at the same time) and the Pulled Pork Meets Meatball Burger, I opted for the latter. 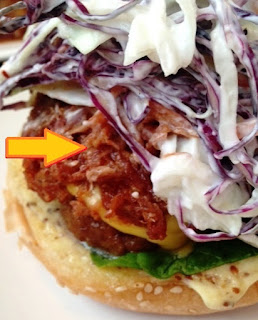 Instead of a typical pork patty, meatball is used at the core, with pulled pork filling the void in between. I was curious how “pulled pork” tastes like. Expecting it to be dry like meat floss or shredded meat, the pulled pork is actually very flavourful, moist and greasy. The taste is very similar to Char Siew just that is is in shredded form. This made me want to google search on how Pulled Pork is made and it is actually a slow cooking method such as smoking to cook well marinaded cuts which are usually tough in texture. Perhaps natural tenderizer such as vinegar, fruit cider, brine are used alongside seasoning like BBQ sauce to prepare pulled pork. The meat layer is then filled with apple-slaw which is apple slices with purple cabbage. I think the portion of apple-slaw is too much as the mayonnaise is slightly over-cloying and masking the sweet and smoky tender pulled pork. Photo above showing the pull pork hiding underneath... 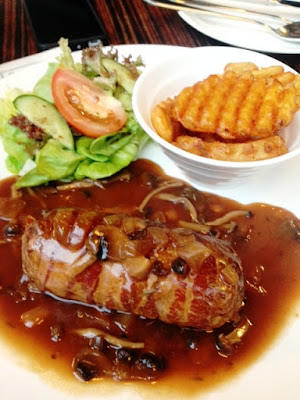 Baconsaurus! The name may sound intimidating but the innovated meatloaf could be easily finished by one single diner.  The portion is not as huge as I expected it to be, and when shared between three pretty piggies and a big bad wolf (yours truly) it was just merely an appetizer. The meat loaf is similar to the ground meat patties used for the meatballs perhaps it is seasoned a little different. The texture and mouthfeel was just right thanks to the right grind size being use. Mom told me that some homestyle cooking combine meat from 2 different grind size for good meat balls or meat patties. Nothing could go wrong with bacon, so the concept of wrapping it with bacon from the “pigs in blanket is not something new, but a proven formula. Coupled with hearty brown sauce which has a slight earthy aftertaste from the sautéed mushroom, I wish to mop the gravy dry with a piece of toast. Oink! 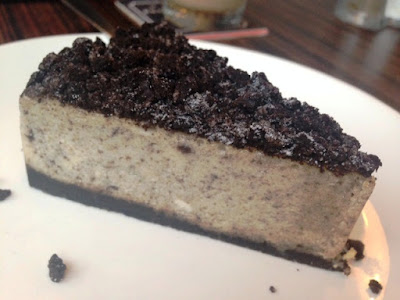 The Oreo Cheese Cake having a very dense layer of cheese is ideally meant for sharing. Tastewise it is good but nothing really spectacular. 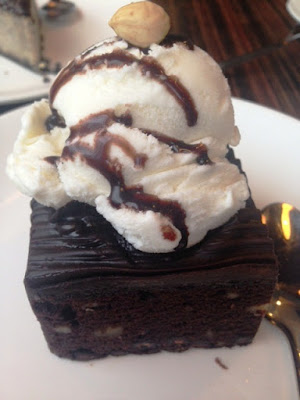 The same could be said for the Brownies with Ice Cream as well. A slice of cake cost RM11.90 which I suggest to skip the cakes and reserve your budget and your stomach capacity for the main course instead. 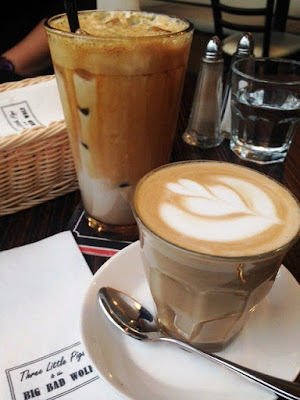 The coffee nevertheless was something worth highlighting. Leaving a full body aftertaste, both the Mocha and Latte would please those on a caffeine fix. The Mocha was brewed a right proportion of everything, unlike most other cafes whereby the chocolate taste is too overpowering. And currently they are having a promotion of buy 1 free 1. How does RM10.90 for 2 cup of coffee sounds to you? 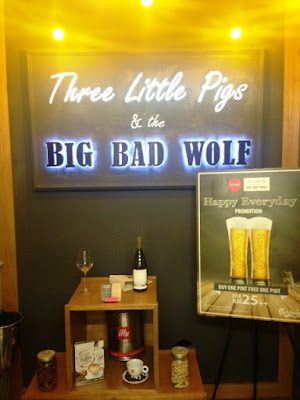 If caffeinated beverages is not your preference, how about ordering their draft beer? They are having buy 1 pint free 1 pint promotion as well. Carlsberg at RM25+ and Kronenbourg at a few ringgit extra. You get 2 pint of beer for less than RM30! What a perfect combination to go along with your porky goodness! 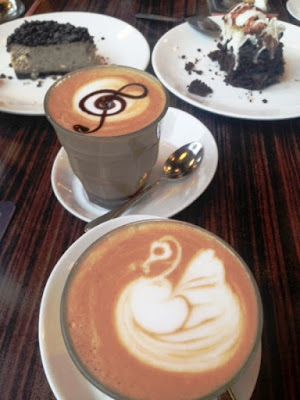 I am sure there are many pork-themed restaurants in Klang Valley unlike limited options in Ipoh. To me, a restaurant should go all out for either a Halal certified outlet or have some pork and alcohol in their cooking. A "pork-free" status does not bring you anywhere. If people wanna go for a pork-free meal, they will just skip the dishes with pork, simple like that. So don't think that going "pork-free" can expand your customer base to include a certain target market. So there you have it, one of the many famous pork themed restaurants. They used to have a story-book like menu and if you wish to have more crisp and sharp photos, do check out one of this post: http://missuety.com/three-little-pigs-the-big-bad-wolf-bangsar-village-1/ or have a glimpse of their menu with creative dishes names like "I Am So Hungry I Could Eat A Wolf" :)